When left alone, there are more ways for things to go wrong than to go right; therefore, if things are left to chance without active-input, negative-change will be more prevalent than positive-change.

Most change, especially in nature, is passive-change and negative-change. Change, if left alone, occurs with negative-consequences because The-Universe is in a constant and increasing state of “disorder.” Because of this default nature of The-Universe, in order to minimize negativity and to increase positivity, we must consciously and consistently put in effort to slowdown disorder so that we can increase balance and harmony around us and in our lives. Of course, we cannot positively affect the disorder in The-Universe but as discussed in the book, we can affect, control and even sometimes temporarily halt “local-disorder” in Our-Universe.

If left alone, even at the minuscule human lifetime scale, change will frequently lead to increased disorder hence resulting in negativity. This phenomenon of increasing disorder is known as the “Second Law of Thermodynamics” or “The Law of Entropy.” Entropy is one the main causes of change.

Theory of Self-Relativity categorizes the main causes of natural change as:

1. Entropy:
Entropy is the tendency for things to move around. Entropy is the measure of disorder and predictability of randomness in a system. Simply stated, entropy is a “lack-of-order” or it is an increasing state of “disorder.” Entropy is commonly associated with the amount of disorderliness, or chaos in a system which in-turn represents the degree of change. Without entropy things stay in equilibrium and remain orderly; however, entropy causes change by creating disorder and motion.

Entropy always increases unless energy or intentional-effort which itself requires energy, is added to the system in order to control or minimize the entropy.

Because entropy naturally causes uncontrolled disorder and change in The-Universe; such uncontrolled change could have negative consequences at the local-level of Our-Universe. For example, to build a building and to maintain it, intentional-input, active-effort and energy must go into it; however, if left alone on its own and not upkept, the building will begin to deteriorate and eventually collapse and get destroyed. When left alone, a building will deteriorate and eventually collapse however when left alone a building will not be created on its own merit hence;

Entropy is the underlying cause of why it is easier to destroy than to build.

2. Motion:
Another law of Physics affiliated with change which affects negativity is Newton’s “First Law of motion” which simply states that “all objects in motion will stay in motion and all objects at rest will stay at rest unless acted upon by a force.” The First Law of Motion, also known as the “Law of Inertia” states, “An object at rest stays at rest and an object in motion stays in motion with the same speed and in the same direction unless acted upon by an unbalanced force.”

The “Law of Conservation of Momentum” which is a part of this first law of motion has actually demonstrated that the nature of all things is to actually always stay in motion. The only reason something comes to rest is because an external-force such as friction or air-resistance causes it to come to rest; therefore, the natural tendency of “things” in The-Universe, regardless of size, is for things to stay in motion.

Many incorrectly think that things around us are in a state of rest and to get them moving we must push or pull them. On the contrary, The-Universe and everything in it are in a constant state of motion and in order to stop an object from moving we actually need to exert force or put an effort into it. For example, even when we are sitting down in our chair we are in motion because the Earth is in motion around the Sun, the Sun is in motion with the Solar-System in our Milky-Way-Galaxy and the Galaxy itself is in motion relative to other Galaxies in The-Universe and finally; The-Universe itself is constantly expanding. The only reason that we feel stationary in our chair is because gravity and friction are keeping us in our “local” place; however, in reality we are in motion with the Earth relative to the rest of the objects in The-Universe. Although sitting down, we might feel stationary; motion is constant yet relative to us. Therefore, even when something seems to be stationary “locally”; that thing is actually in a state of motion at a larger-scale.

The reason why motion exists is because of the increasing disorderliness of things in The-Universe, hence the reason why all objects are actually constantly in motion and not at rest; therefore;

Motion itself exists because of entropy.

This means everything in The-Universe is in a constant state of motion and change. Change occurs naturally and constantly as time goes by; therefore, time itself occurs as a result of entropy.

Since we live in time and time exists as a result of entropy which governs the expansion of The-Universe; therefore, we as humans, are bound by the laws-of-physics. This means, at the human local-scale, we are connected to The-Universe via material and physical existence that is governed by the laws-of-physics. We are related to everything in The-Universe through our material, molecular and atomic existence. Science has shown with certainty why everything and everyone in The-Universe is relative to one another through “natural” laws and through “material” existence.

Immaterial, metaphysical or supernatural “things” cannot exist in The-Universe because they cannot follow nor adhere to the laws-of-physics that govern the material or matter-based Universe. Spirituality, personal or mental energy, souls, ghosts, chakras or any form of supernaturalism have never been able to factually describe our relativities to The-Universe. In order for anything supernatural to exist, this means the supernatural thing or phenomenon would have to violate the natural laws-of-physics. The reason why there has never been any proof of the supernatural is because the laws-of-physics would not allow that. If and when any supernatural or spiritual entity is factually proven to exist; the claimed supernatural thing or phenomenon will automatically become natural because it would have to interact with matter in order for us to know of its existence. In other words, they could be explained factually and with evidence. Since the supernatural or immaterial-things are claimed to not be made of matter; therefore, these immaterial-things could not interact with the material Universe, including with humans hence even if such a thing existed, we would not be able to know about it.

In order for us to know about something, that something must be able to interact with matter.

The reason why humans have ideas, thoughts and beliefs on supernaturalism and immaterial-existences is because such mental-states are developed as thoughts and thoughts can either be based on observation or they can be based on imagination or hallucination. Ideas, thoughts and beliefs are proven by experiments and fact-finding. If after a long-period of time supportive facts could not be found for an idea, a thought or a belief; that idea, thought or belief is most probably incorrect. The only reason why baseless thoughts, beliefs and theories persist for generations and even for millennia is because these mental-states are comforting and they enable us to avoid pain and to feel good therefore we choose to continue believing and holding onto these thoughts and theories without seeking for supportive facts and evidence. For example, ideologies such as dualism which believe in a person having a material body and an immaterial mind or soul are simply carried forward traditions emanating from imaginations of ancient people who didn’t properly understand science and the physical Universe. The only way that we can realistically understand our connection to The-Universe is by understanding how “we” as material-entities function, relate to and abide by the laws-of-physics.

This is why Theory of Self-Relativity is founded upon the principle of factual-thinking. Factual-thinking is based on facts and facts abide by the natural laws-of-physics which govern The-Universe. When we learn to control our mind to always seek evidence for every thought that we have; we will then base our thinking and our existence on facts and evidence rather than basing it on imaginary “feel-good” traditions and beliefs that are carried forward. Even change, which is the core requirement for self-improvement occurs because of the laws-of-physics therefore, we as individuals have no choice but to change. As stated throughout Theory of Self-Relativity, change is an ongoing-process and change happens and will continue to happen in The-Universe regardless of how we feel; therefore:

Change; or you’ll be changed. 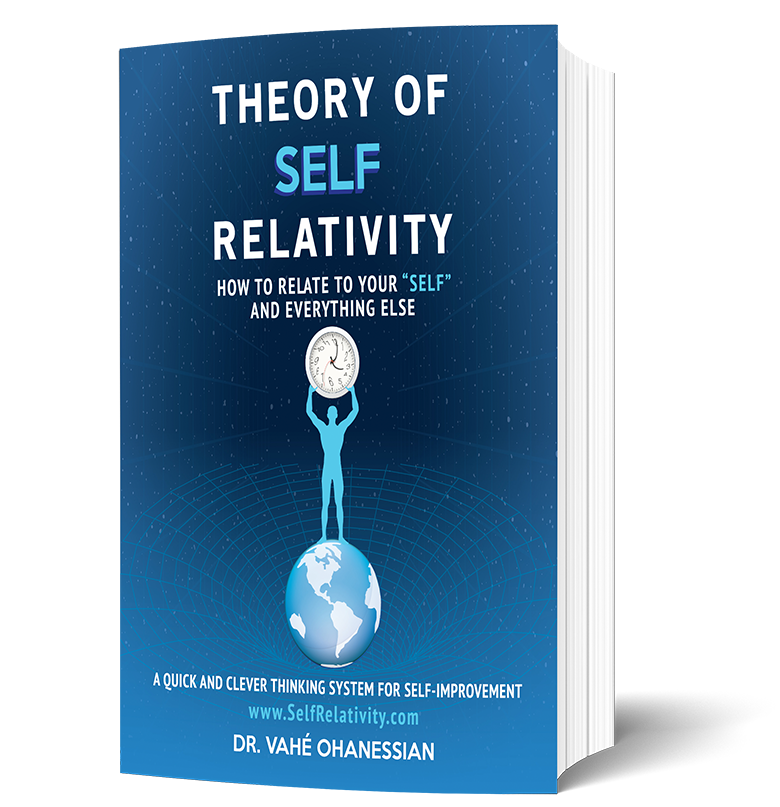 “To change is natural...to not change is unnatural.”